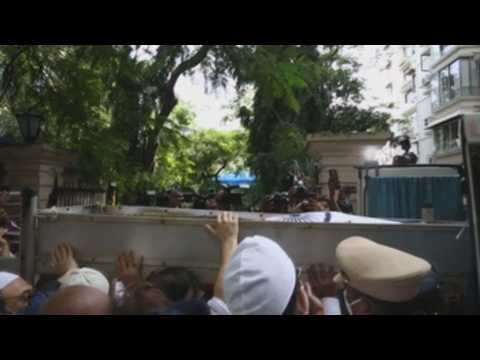 Mumbai, Jul 7 (EFE/EPA).- Dilip Kumar, one of the most celebrated Indian actors, who earned the nickname of ?The Tragedy King? for his lugubrious roles in Bollywood films, died on Wednesday morning, his family said. He was 98.Born as Yusuf Khan in 1922, the actor was more famous for his screen name of Dilip Kumar and dominated the Indian cinema during what is known as the golden age of Bollywood from the 1940s to the 1960s.He was ailing for quite some time and was admitted to a hospital a week ago. (Camera: DIVYAKANT SOLANKI). SHOT LIST: BOLLYWOOD ACTORS AND DIRECTORS ARRIVE TO PAY THEIR RESPECT TO LATE BOLLYWOOD VETERAN ACTOR DILIP KUMAR, AT HIS RESIDENCE IN MUMBAI, INDIA.